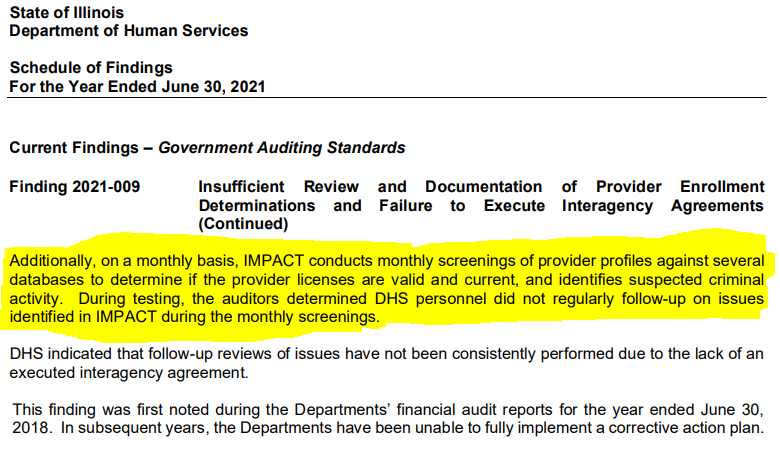 After the Illinois Department of Human Services (DHS) was exposed over five years ago for abuse and neglect of individuals with disabilities, an audit released today by the Auditor General confirmed the state does not regularly follow up on the suspected criminal activity of Medicaid providers in the state, which includes group homes otherwise known as ‘CILAs’ for the developmentally disabled.

According to State Representative Charlie Meier (R-Okawville), “Criminal activity is happening in our group homes and the state is not following up or even doing anything to help. This is not right, something has to be done to better protect the developmentally disabled. Four years later and 74% of the audit recommendations still have not been fully implemented. This is beyond disappointing, it’s as if the people in power don’t care about the safety of our developmentally disabled persons.”

On March 15, 2017, an audit was requested by State Representative Charlie Meier under House Resolution 34 in response to the tragic reports of abuse and neglect which came to light thanks to the Murray Parents Association’s work with the Chicago Tribune. The reports sparked an investigation by the newspaper, then followed by the Tribune publishing its story in 2017 titled SUFFERING IN SECRET: Illinois hides abuse and neglect of adults with disabilities,” in which the newspaper “identified 1,311 cases of documented harm since July 2011 and determined at least 42 deaths linked to abuse or neglect in group homes or their day programs over the last seven years.”

When the Auditor General released the audit concerning oversight of CILAs back in July 2018, the audit found weaknesses in the licensing process for CILAs and the monitoring of CILAs by DHS, resulting in 26 recommendations to DHS to improve CILA oversight. In another state audit released in July 2020, the Illinois Department of Human Services had not yet fully implemented 19 of the 26 recommendations (74 percent) from an audit released in 2018.

Since then, Rep. Meier and a bipartisan group of lawmakers introduced House Resolution 265 that would direct the Auditor General to conduct a management audit concerning the oversight of the CILA program and the awarding of competitively-procured grants. The resolution cleared the House Human Services Committee and awaits action by the House of Representatives. Meier hopes his colleagues will support this resolution to protect the developmentally disabled in the upcoming session to be held in November.

Rep. Meier added, “To this day, not all group homes are bad, however, I want them all to be the safest and best group homes on the planet. Since DHS continues to fail at making the safety of our most vulnerable a priority, my office will begin to work on legislation that will force the agency to implement the changes necessary to drastically improve the safety and care for our developmentally disabled in the state of Illinois.”