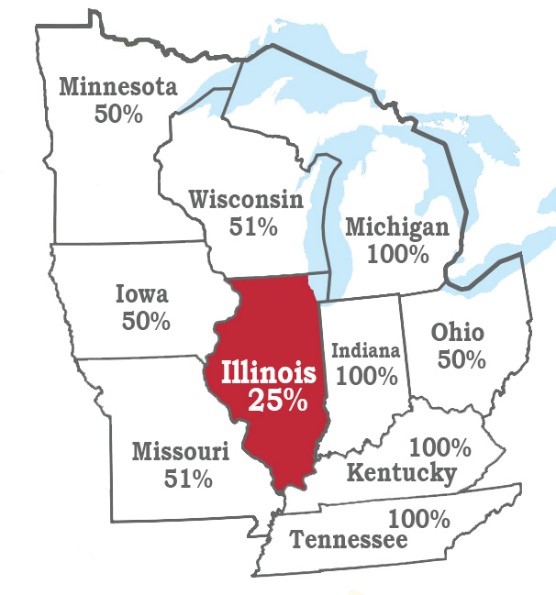 A new regional analysis of the economic impact of the state’s tort system shows almost $200 million in annual direct tort costs to metro-east consumers, equaling $439.61 per resident. If the costs were returned to the economy, the amount would equal the salaries of approximately 3,530 jobs.

“It’s no secret that the State of Illinois, and especially the metro-east region, is home to an aggressive plaintiff’s attorney bar,” said John Pastuovic, president of the Illinois Civil Justice League.  “While metro-east residents have been hit hard this legislative cycle with new taxes and regulations out of the legislative action in Springfield, it is easy to forget that more than two decades of inaction on important civil justice-related reforms is literally taking more than a thousand dollars annually out of each and every family’s pocketbook.”

State Rep. Charlie Meier (R-Okawville) joined Pastuovic in the call for reforms to the State’s civil justice system, calling the decades of inaction by the Democratic-led legislature harmful to the State’s economic and job-creation environment.

“Metro-east employers see the differences in burdensome regulatory and litigation environments between Illinois and Missouri,” said State Rep. Meier.  “That’s why I am sponsoring sensible reforms like House Bills 164 and 2047 to bring greater fairness to our courthouses.”

House Bill 164 reforms the venue and joint/several liability standards.  House Bill 2047 reforms the Election Code to prohibit sitting judges from retiring from their seats to run for election for the same seat, skipping the traditional retention system prescribed by the State Constitution.

Pastuovic stated that border counties, like those in the metro-east, are often hit the hardest when a state’s business climate ranks low compared to its neighbors. Pastuovic stated unfortunately this is also true when it comes to an unchecked trial bar who work to coopt the state’s laws to benefit themselves, instead of consumers and small businesses.

“One great example,” Pastuovic cited, “is the discrepancy between Missouri and Illinois regarding joint and several liability for local businesses. It may sound like an arcane legal term but, in Illinois, a business or resident can be found as little as 25 percent liable for an injury in court and be forced to pay the entire judgement. In Missouri, that standard is 51 percent fault. This is a major hurdle in providing a stable legal climate for new business and job growth in downstate Illinois.”

So, while additional new taxes and regulations are burdening downstate Illinoisans, Pastuovic said consumers statewide should not forget the $4.5 billion in direct costs of excessive litigation in Illinois as detailed in the study of annual tort costs conducted by The Perryman Group.

“The pendulum has swung wildly towards the trial lawyers, at the expense of consumers,” stated Pastuovic. “This year three or four major trial lawyer-supported legislative initiatives, that further enrich lawyers and take money from consumers, have or will become law. They include an expansion of occupational disease lawsuits (SB 1596) and consumer fraud lawsuits (HB 2472). Money for the oversized settlements and verdicts from these initiatives just doesn’t grow on trees. Ultimately it comes from the increased price of goods and services, or from lost employment opportunities.”

The annual “tort tax” robs more than 81,685 jobs from the Illinois economy, according to the study. Furthermore, the excessive litigation extracts an extra $732 million in revenues from state and local governments, causing additional taxation of Illinois residents.