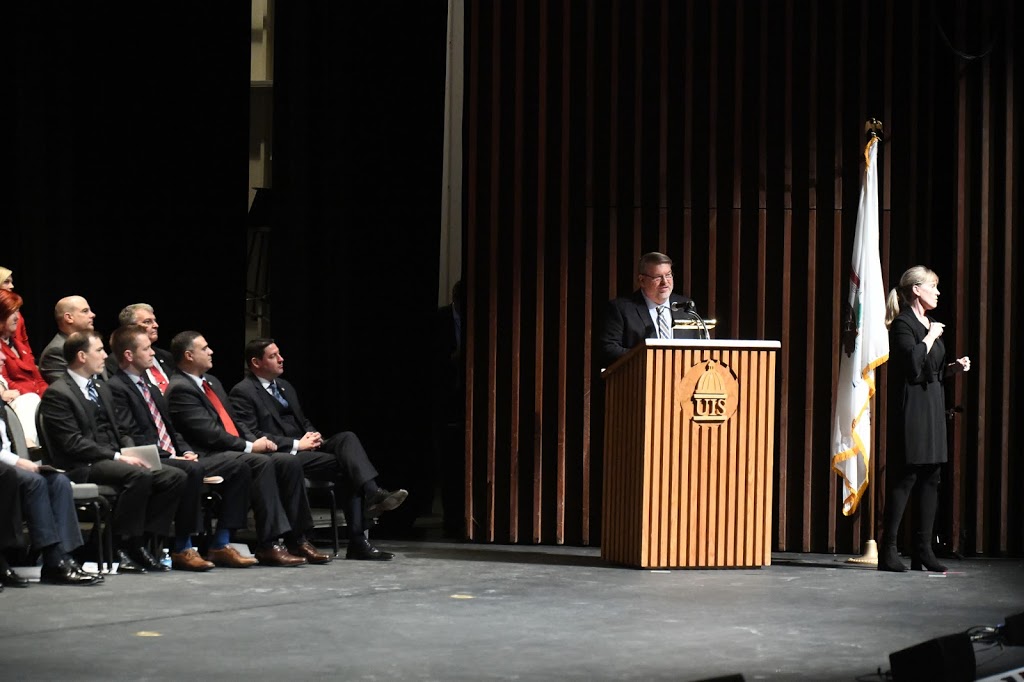 State Representative Charlie Meier (R-Okawville) was sworn into office on Wednesday, January 9 at the University of Illinois – Springfield, the official inauguration of the 101st Illinois General Assembly. In addition to Meier taking the oath of office, he nominated House Republican Leader Jim Durkin for Speaker of the House.

Following inauguration, the first order of businesses for the House of Representatives is to cast their vote for Speaker of the House. Rep. Meier nominated Jim Durkin for Speaker, offering lawmakers a choice between Jim Durkin (R-Western Springs) and incumbent Speaker Mike Madigan (D-Chicago).

According to Rep. Meier, “I’m proud to stand here today and nominate Jim Durkin for Speaker of the House. Jim Durkin genuinely understands each of our districts, he respects that all of us have been elected to represent our district and must advocate for what our district needs. Durkin has proven he will do what is right and what is best for the State of Illinois. He will work with all of us, regardless of party affiliation. During his time in the House, Jim Durkin has been successful at reaching bipartisan agreements to keep the state moving forward while not compromising the core beliefs of the Republican caucus.”

Throughout Representative Charlie Meier’s service in the legislature, he has received multiple awards from the business community for his pro-jobs voting record, passed legislation helping our Veterans, helped Illinois become the 50th state to enact concealed carry, as a farmer, he’s not shy to advocate for Illinois’ #1 industry – Agriculture, and Charlie successfully fought to keep Murray Center open.

“It’s a privilege and honor to begin another term as state representative,” said Rep. Meier. “My door is always open, whether it’s a face-to-face meeting or conversation on my personal cell – I’m here to serve you. I won’t stop fighting for southern Illinois while defending our core principles.”

Rep. Meier is a lifelong resident of Washington County who lives on his family’s Centennial Farm outside of Okawville. A farmer and real-estate developer, Meier has previously served as an elected member of the Washington County Board. Additionally, Meier has served as a board member for Southwestern Illinois RC&D (a conservation-focused organization), the Vice-Chair of B.C.M.W. (a multi-county social services organization), a longtime member of the Addieville Area Jaycees, and multiple other local organizations.