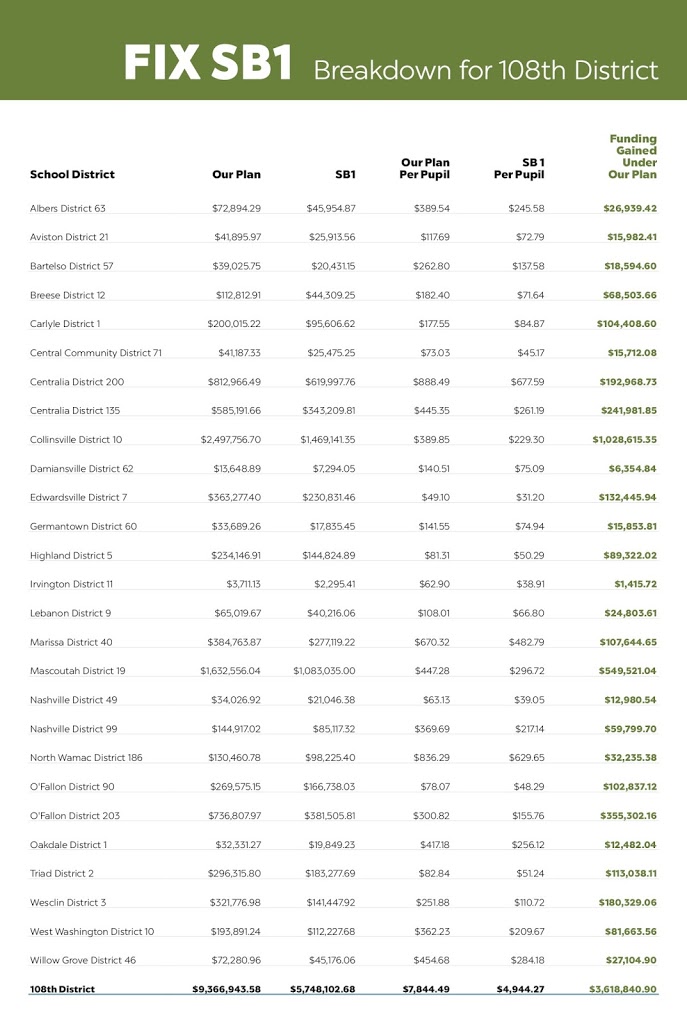 With back to school approaching in August, the Democrat controlled legislature has delayed sending Governor Bruce Rauner their school funding bill Senate Bill 1 (SB1). The Illinois General Assembly approved SB 1 in late May, yet as of July 19th, the Illinois Senate has placed a hold on sending SB 1 to the Governor as a way to leverage funding to pay for Chicago teacher pensions. According to State Representative Charlier Meier (R-Okawville), “a funding plan that gives a special benefit to Chicago at the expense of schools in my district is a plan I will not support.”

“SB 1 in its current form is nothing more than a bailout for Chicago schools at the expense of schools in our region,” said Rep. Meier. I support the Governor’s plan to fix SB 1 because his plan will provide more funding for downstate schools and it will not bailout Chicago. Governor Rauner’s fix for SB 1 will provide $3.6 million for schools in my district.”

SB 1 directs millions of dollars to Chicago Public Schools (CPS) and away from school districts in southern Illinois. Under SB 1, the other 851 school districts in the state will receive less funding while Chicago schools would receive a $506 million historical pension payment, resulting in less funding for downstate schools. To make matters worse, CPS recently disclosed they anticipate 8,000 fewer students attending the city’s public schools this fall, making the Governor’s fix to SB 1 even more necessary to make sure downstate schools receive their fair share of school funding.

Rep. Meier added, “I stand in strong support of the Governor’s plan to fix SB 1. I urge the Senate to send their education funding bill to the Governor’s desk immediately in order for the Governor to fix the bill in time for our schools to receive the funding they need to open as scheduled in August.”

To find out how much more your school will get under Governor Rauner’s school funding plan, click here. Enclosed is a chart illustrating how much schools will gain under the Governor’s plan to FIX SB 1 supported by Rep. Meier: